The Avengers are back to save the world, again. Some of us Marvel Comic fans have been waiting for this movie for over 5 years! The movie’s production as announced in 2005, but due to set backs and casting delays, the scheduled release has moved back until May, 2012. The wait is almost over and the anticipation is growing as “The Avengers” movie ads are playing everywhere you turn. With stars like Robert Downey, Jr., Chris Evans, Mark Ruffalo, Chris Hemsworth, Scarlett Johansson, Jeremy Renner, Tom Hiddleston, and Samuel L. Jackson, The Avengers is one of the most anticipated Marvel movies yet. Enough about the movie, let’s talk about the movie’s product placement and the Acura NSX Roadster.

Tony Stark (Robert Downey Jr.) was caught on set of The Avengers standing next to the new Acura NSX. The new Acura NSX concept car will not even be available to the public until late 2015, but the whole world is buzzing because the Acura NSX is now the official car of The Avengers. This early summer blockbuster should be one of the best superhero movies from Marvel Productions, partially because of the new NSX which could very well be the Honda supercar we’ve been waiting for. However, the new NSX featured in the film may not exactly resemble the NSX that is said to be available in late 2015. Tony Stark’s NSX is a multimillion dollar, hand built, one of a kind car that was made specifically for The Avengers movie and it was actually created from a 1991 Acura NSX. Even the interior has the old NSX tape player! Although Tony Stark (Robert Downey Jr.) will get the honor of cruising around in the Acura NSX concept, people are asking, how fast will he actually be driving? Good question! We were shocked to learn that if the The Avengers Acura NSX goes over 10mph, the body panels will fly off!

Acura has signed a multi-picture deal with Marvel Productions, and needed a car that would live up to Tony Stark’s extravagant, thrill seeking, peddle to the metal life style. To replace Tony’s Audi R8, Acura needed to produce a fast, sexy and over the top vehicle, the Acura NSX Roadster. According to Mike Accavitti, Vice President of National Marketing Operations, “Acura is excited to continue our presence as the official vehicle of S.H.I.E.L.D. in Marvel films.”

How fast will the real Acura NSX go? How much will it cost? Slow down, pump the brakes because we are just as excited as you are. Rumor has it, the new NSX will be priced to compete with the Nissan GT-R with a 3.5 to 3.7-liter V6 driving the rear wheels, and an electric hub motor in each of the front wheels. Although Honda officials continue to deny that Tony Stark’s Acura NSX is what the production version NSX will be, we can all dream! 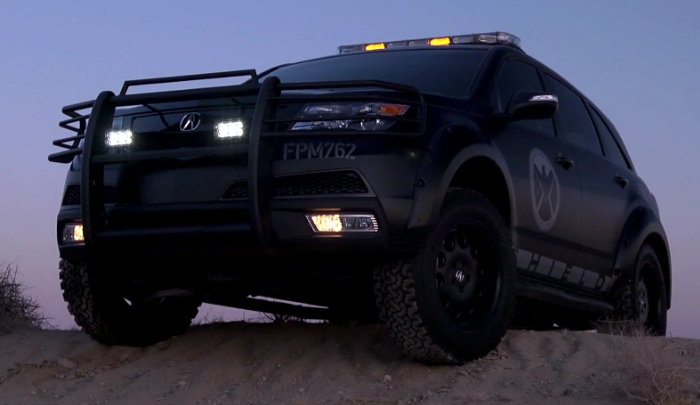 The Avengers #1 first started appearing in magazines published by Marvel Comics in September 1963. And, after many delays, The Avengers are back. The movie has experienced many setbacks due to casting issues, and the addition of Scarlett Johansson in March of 2009. Although the release has been pushed back until May 4th 2012, we believe it is well worth the wait! We can’t wait to watch The Avengers team up to save the world, again. We hope that the movie does not disappoint. Here are a few of the current movie posters.